Get Your Tickets HERE!

You have been called to the scene of a murder.

As you walked up to the scene on the side lawn at the Gray Mansion, patrol officers brief you on the following:

• The first call came in at 4:47 p.m. and a neighbor reported seeing a fire with black smoke coming from Gray Mansion. A crew from Fire Station 3 was dispatched.

• The officers at the scene tell you they arrived at the mansion and immediately secured the premises and have confined the guests of the mansion. The guests are allowed to roam the mansion, but are watched to make sure they do not interfere with the investigation.

• The Fire Inspector informs you the crew arrived to find what appeared to be body fully engulfed in flame. In fact, it was still smoking when you arrived. The inspector is sure the fire was set with diesel fuel.

• Upon inspecting the body, you can tell the body was placed in its current location by the drag marks leading from the side door into Gray Mansion. The murder scene is definitely one of the rooms in the house.

• The body is too badly burned to determine the cause of murder right now. When you call for the coroner Professor Plum, you are surprised to see he is already there as a guest at Judge Gray’s party.

• A check of the victim’s pockets reveals a wallet. You can peel back just enough to barely make out a name within, Joel Coal, intrepid reporter, burnt to a crisp. Joel was known for his detailed investigative work. You recall Joel’s investigations once helped you crack a string of robberies. It’s a shame to lose him like this.

• You look around the outside of the mansion, only fancy autos. Where is Joel’s old clunker? You ask a few officers to search for Joel’s jalopy. They find it around the corner and bring you the only item inside: his reporter’s notebook. The first thing you notice in the notes is the repeated mention of a secret society: The Shielded Line. This case is bigger than you first thought.

Your Objective: Figure out who killed Joel Coal with what and in which room of Gray Mansion.

Rusty Brown is the town’s best (and best paid) handyman and housekeeper.

He started life as a charmed son. A star quarterback in high school and college, he led both teams to championships. But like so many athletes, injuries ended his NFL dreams.

Because of his ties to the college, Judge Gray employs him to perform maintenance on Gray Mansion. Brown also works on other homes of all the wealthy and well-connected, including most of the people at the mansion tonight.

Around town, he’s known as quite a good cook. His recipe wins the annual hot chicken cook off. You’ve heard he might sell it to The Backstreet on Broad.

How is he connected to the murder of Joel Coal? And, more importantly, why is he wearing a French maid’s outfit? 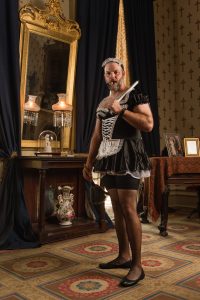 Judge Gray came to his seat on the bench the old-fashioned way. He bought it.

Through his dealings as Miss Scarlet’s real estate attorney, he amassed his fortune with impeccable, and some who say suspicious, timing of purchases and sales. His timing and wealth also allowed him to buy the mansion where the murder took place. He got a such a deal on the historic home, some would (and do) call it a steal.

But that doesn’t keep the town from loving and supporting him and his family. The Grays are as close to a political dynasty as the town as ever seen. His father served for years as Sheriff before retiring. When Gray ran for town judge, he won in a landslide to no one’s surprise.

The town’s affection for Judge Gray allows for him to do things mere mortals can’t, like being allowed on the sidelines at every Town College football game, where he is seen whispering play calls into assistant coach Col. Mustard’s ear.

Could he use his influence to cover up the crime? He fancies himself a community leader. Could he be a leader of The Shielded Line? What is the goal of the secret society anyway? What are these people up to in that old creepy mansion? 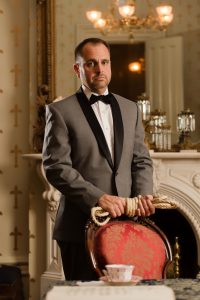 Just like Mrs. Peacock, Mr. Green has a hidden talent. While he doesn’t show off with the house band, he can also belt out a tune or two, if given enough … social lubrication. You’ve heard he prefers to travel to other towns to practice his opera. What else could he be hiding?

Mr. Green is the town’s biggest slumlord — oops, you meant LANDlord — and property owner. He has a habit of buying up historic buildings and replacing them with ugly, new buildings. He recently bought the community theater from the city and turned it into yet another apartment complex. The fact that his brother works in the town’s planning department probably gives him some inside information and greases the wheels of government.

Because of the animosity from some of his dealings, Mr. Green has tried to buy the town’s affections. He donated land for football team’s current stadium location, which was kindly named Green Stadium in his honor.

But one question nags at you: If he was involved in Joel Coal’s death, why wouldn’t he just hide the body on his extensive land holdings? 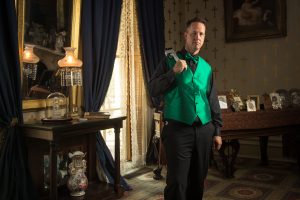 The Colonel retired to town from the Army. In the years since, he has become something of a local celebrity through hosting his local radio show, which has won the Best Variety Show category in the Favies, the town’s best of contest, for five years in a row.

Col. Mustard’s charisma oozes from a well-read weekly column in The Murfreesboro Tribune, where he has been seen in the newsroom chatting with Joel Coal.

In his spare time, he likes to help as assistant coach for the local college football team.

He’s so admired you have a hard time thinking he could kill anyone, much less a reporter he had at least friendly relations with.

Could he be hiding a darker side with all his good works? Or could he have used his influence to push someone else to murder Joel Coal? 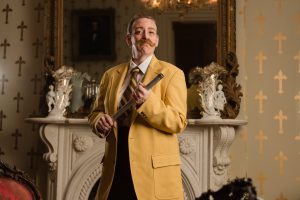 This colorful woman may come from money, but that doesn’t make her a dummy. She’s smart and savvy with her investments, which has served her well since her husband’s untimely death.

You’ve heard that most of her investments have been with Mr. Green and Miss Scarlet. Could one of those investments caused a problem?

You also know she loves music, but then half the town knows because she often joins the band in the courtyard of her favorite restaurant, The Backstreet on Broad. She’s a great singer with a penchant for opera.

How is she connected to this mess? Is she a member of The Shielded Line? You would never suspect her of anything that nefarious. 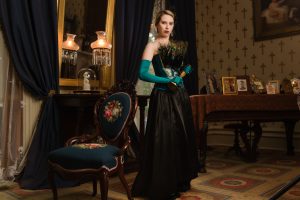 The former surgeon now spends his time teaching at the Medical School and serving as the County Coroner.

Plum became a doctor while serving under Col. Mustard in the Army.

He gives back to the community by leading a youth group at church.

His knowledge of anatomy and forensics could help in the disposal of human remains but the back injury he got in the Army could keep him from moving the body outside.

Does he have access to poisons as the coroner or at the Medical School? 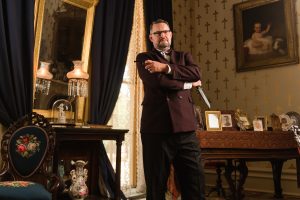 Known by all as the savviest business mind in town, she has stakes in everything from residential and commercial real estate to manufacturing and the pharmaceutical company Six Pebbles. Given her extensive holdings, Miss Scarlett is integral to the local business community. Not much happens without her knowledge or approval.

You’ve heard she has a temper with those who cross her or insult her business standing as a woman. The few men who have crossed her have left with fewer teeth, bloodied noses and bruised prides. Joel Coal told you that her handshake was surprisingly firm.

She is often seen at networking events, like the Chamber’s Business At Lunch, which is held at her favorite restaurant The Backstreet on Broad. In fact, you just saw her there the other day with Mrs. Peacock. They were deep in a serious conversation. About what, you couldn’t tell.

One thing was sure though, her scarlet signature lipstick is always flawless.

What was she talking to Mrs. Peacock about? Are all her business deals on the up and up? Has she finally crossed the wrong good ole boy? Could she be the financing behind the scandal that Joel was investigating? The sister of a prominent state senator, Mrs. White is more of a social butterfly than anything else. She’s often seen at the same networking events that Miss Scarlet frequents. In fact, Joel Coal’s notes say he saw her at one last week speaking animatedly with Miss Scarlet and Mr. Green. He must have gotten close enough to eavesdrop, because his notes say he heard something about an “annual meeting at Gray’s” and “the other society members need to know” before their conversation was broken up.

What she lacks in actual power, people foolishly give to her by confiding their secrets in her comforting shoulders. But then she turns around and gossips. Some people claim she’s People magazine made flesh. You’ve always thought she should put her knowledge to better use.

She definitely knows more than she’s letting on. But will she spill the beans? 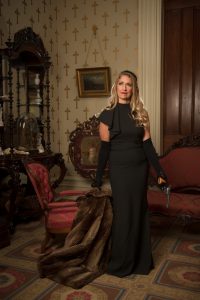 Mr. Umber the Butler is the best at butling and the worst at gambling, but that doesn’t stop him from throwing good money after bad to support his habit. How does he afford all those bets?

You don’t know much about him expect his father was in banking and was often seen in the company of the other people in the mansion before he died of a heart attack. Umber got his father’s gift with numbers but squanders it at the poker table.

You assume he’s here tonight in his official capacity but you wouldn’t be surprised if he were involved somehow. In fact, you’d bet on it. 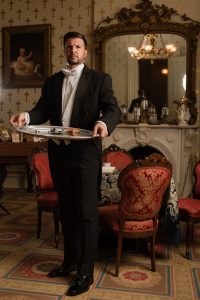 YOU are the detective.
Can YOU solve the murder of Joel Coal? 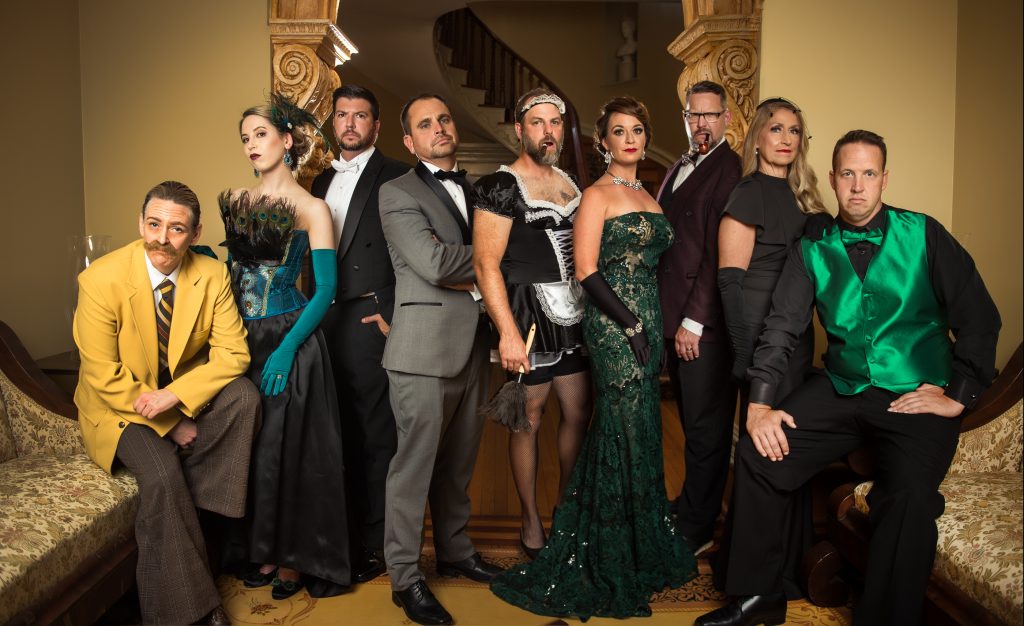 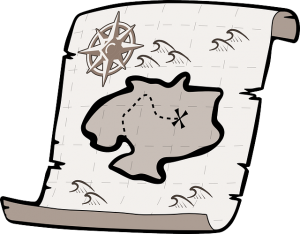 Get Your Own Scavenger Hunt Now

We are excited to offer you a sample scavanger hunt that you and your friends & family can enjoy! Just enter your email to download it. We promise never to spam you.